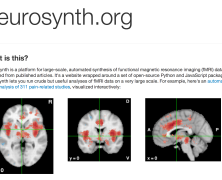 The 15 Minute DSI Project first began at the 2013 Hackathon in Paris, France.

The Neurosynth website is currently supported by a Rails back-end. There’s nothing wrong with Rails, but since the rest of the Neurosynth codebase is written in Python, and the scientific computing as a whole is pretty Python-centric, it would be much more productive to move the web app to a Python framework. The goal for the Hackathon is to rewrite the back-end in Flask and have a working prototype ready by the end of the event. If time allows, we also plan to add a number of new bells and whistles.